Reno’s Convention Center, part of the formula for the future

12°  What makes Reno, Nevada unique? Here are some of the wrong answers:

Reno is Dying
The question about Reno’s uniqueness is critical to the survival of Reno. Over fifty years ago Reno discovered tourism and that vaulted a small desert town into easy money and big growth. The city learned that when people make their money elsewhere and spend it in Reno, the economy of Reno booms.

But for the last decade Reno has lost its uniqueness. Gaming is something you can do at the nearest Indian Casino. If you want to party and see gaudy construction lit up like game show on LSD, then go to Las Vegas. Reno is nothing when it comes to gaming.

Reno’s is Unique
The one thing that Reno has that no other city has is hotel room per capita. Nevada has one hotel room for every 14 residents, and Reno’s ratio equals or exceeds that average. Reno is a city designed for conventions. The problem is how to get convention organizers to consider Reno as a great convention town.

What won’t work is to keep gaming as the attraction. That industry is poison. It demands that the convention goer stay on the property and gamble, which defeats all the other great attractions that might attract repeat business, and American business people do not want to pay for their employees to go and party. The best thing that could happen in Reno is for gaming to be made illegal.

The other challenge is to get all the properties to work as one. That doesn’t happen that often. One property can shoot the city’s bid for a convention down by not cooperating.

However, if Reno can let go of gaming and focus on the big picture, it could be made into the premier convention town.

This sculpture, tucked away near and abandoned Wal-Mart shopping center shows what happens when you have two cities competing for business:  boxes with nothing in them

348°  One of the ongoing tragedies in Nevada is the resource-sucking duplication of two cities in one valley. Reno was founded in 1868. About 30 years later the railroad put in a switching yard a few miles east of Reno and rabble living there declared it and surrounding few houses a city. It was originally named after the President of the railroad, but it was quickly renamed after the current Governor of Nevada, John Sparks, who was very cozy with the railroad.

The attitude of the City of Sparks has probably always been one of jealousy of Reno. Sparks main feature has always been the railroad yard, which is as close as the city comes to having a downtown. The desperation to best Reno has led Sparks to be on a never-ending campaign to steal commerce from the original city.

One example of the damage Sparks has done to the community is the desperate attempts to create a premier shopping center at the far east side of Sparks. To entice businesses they offered taxes incentives. Lowe’s took advantage of this by closing down one of their large home improvement centers in Reno and relocated in the Sparks. Now the community has no additional jobs, but the business provides less in tax revenue for the citizens.

The result has been to have three competing governments (City of Reno, City of Sparks, Washoe County) serving one community, each with duplicate services. No one is benefiting from the mud wrestling-like competition. The premier shopping mall in Sparks is noticeably lacking in customers, even during the holidays.

The Reno/Sparks/Washoe fiasco is typical of Nevada. It is why we are the best of all the worst indicators. High in violent crime, high in unemployment, low in education. Barring a miracle, failure is Nevada’s only option. 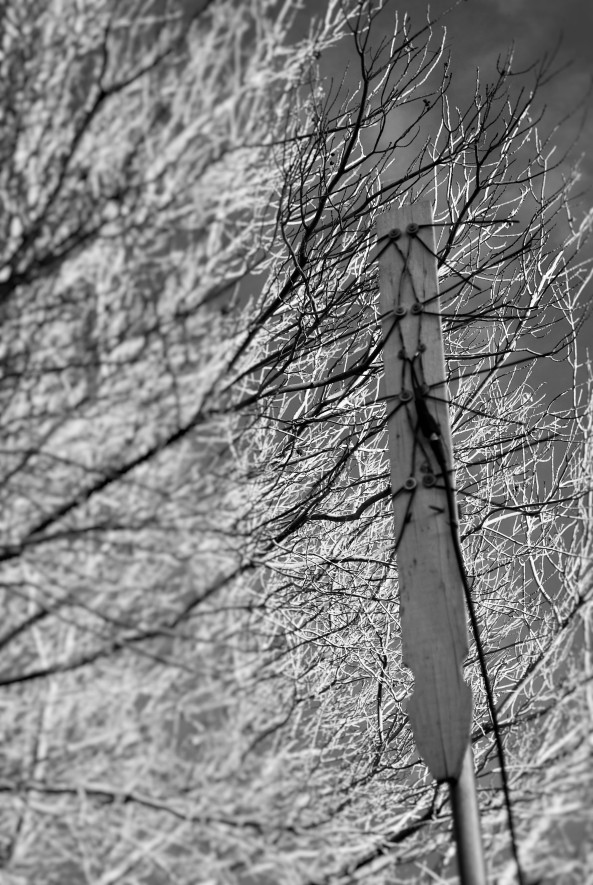 101°  We’ve lived in the same house for over eighteen years, which is about the same amount of time we’ve been married. The house came with a standard television antenna that stood over our chimney in defiance of the wind, (why we’ve never had cable television is another story,) but after several years the wind finally won and I had to replace the old antenna.

For some reason I became interested in building an antenna from instructions I found on the Internet and it turned out to be better than our old one. The thing looks like it couldn’t possibly work and yet we pick up all the areas digital channels with no reception issues unless we have high winds.

For most people, cable or satellite TV is a necessity of life. There is also pleasure in not being a slave to every necessity. Our perception of life is often framed by what we think life must include, but sometimes we need to try life without certain ‘musts’ in order to discover what is important.

90° to 255°  Reno, like much of Nevada, has a history of focusing on the fast buck rather than building a long-term economy. At any given time at least one large commercial property sits vacant for a decade or more as community leaders look for a business solution to magically restore life to a dirt lot or an abandoned building.

This massive lot was the site of the former Park Lane Mall, which is located south of the downtown area. Rather than rebuilding a new Mall here, the various local governmental entities have conspired against each other to have two large retail properties created outside of the Reno City limits. Thus, the tax base is weakened and people have to drive farther to shop.

Welcome to the Boom Town. 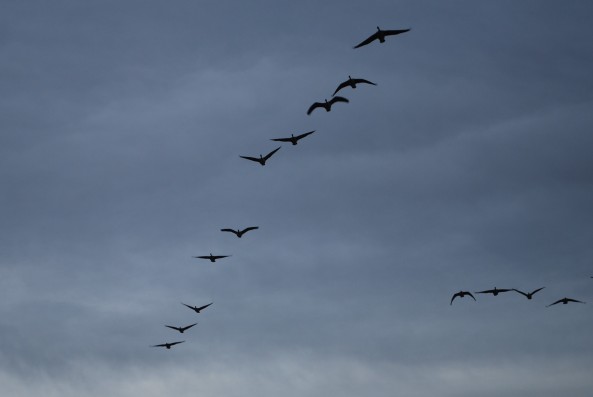 87°  Geese are protected migratory birds and I think that has gone to their heads. They seem act like they’re the guy in the company who knows he can’t be fired because his father is a special friend of the owner. You would expect a goose to bitch about how bad the government is as they enjoy the benefits of the protection of that same government.

Geese are one of the few animals that are known better for the crap they leave around than for anything else. They even fly in a formation that allows them to be lazier than the leaders ahead of them. They rarely live up to expectations. How many times have you watched geese fly in any other direction than South in the late Fall and early Winter? Quite frankly, geese are a pain in the ass.

23°  Winter is so ugly it has beauty. If we didn’t have cold weather we would have bugs the size of rats and poisonous spiders and venomous snakes in our houses at night. I have no great fondness of Winter, but despite its harshness, it is the Yang to the Ying of Spring and Summer.

200°  When I was a boy I was given a small telescope and I remember spending several weeks observing the Moon with it. I became fascinated with the Moon, and I still consider it my lonely friend that quietly hovers over our world. When I see the features on the Moon through a telescope I get a sense of being there, floating above the surface.

If desire could have helped me fly then I would have been to the Moon and back again. I don’t think people understand how special our Moon is and what it has meant to life on Earth.

If the Moon is visible I almost always look up at it. It always reminds me that I’m part of the cosmos.

The long shadows of Winter on next Spring’s mulch

There is no set order in these activities, but usually the last two things accomplished are striking the outdoor decorations and recycling the Christmas tree. Today, both were done and now we can move out of holiday mode and into the long wait for Spring.

I know real Christmas trees are wasteful and incredibly dangerous when they become dry; however, I always regretted when my Mom decided to go with a fake tree. It seemed to make Christmas artificial. It was also about the time that some of the magic of Christmas was lost…only to return with greater power when my children became old enough to discover the excitement and anticipation of December 25th.

We can put this season to bed for another year while the Earth plots another visit to these constellations December next. 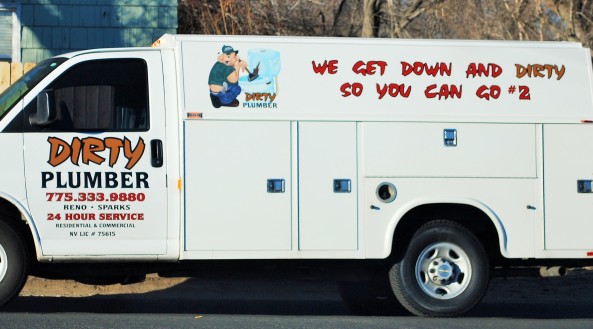 Quality You Can Taste

3°  The first impression is always the hardest one to overcome, so it’s important to get it correct. I’ve seen this truck before and every time I see it I find myself mystified by the lack of awareness of the business owner.

Any business owner aspires to one thing if they wish to be successful: A public image of desirability. That’s it. As a business owner you want to be desired or wanted by the people who can pay for your services. To do this you must create a public image that enhances desirability. You want to show them that you are worth the money they are going to pay you for your service.

Yes, you can use humor, but humor is a dangerous thing in the world of public image. It can have people laughing with you, or laughing at you. A business owner never wants the public laughing at him or her.

I think I understand what this business owner was trying to do, but I can’t understand why they didn’t see the problem with the public image created by the slogan:

Sure plumbers get dirty and deal with the worst aspect of home maintenance, but is this the image you want to use? Is the image of filth what customers want when selecting someone to come into their home? What type of customer is likely to be attracted by this slogan? Affluent or people with little spendable income? Is plumbing only about sewer work?

Maybe the business owner believes that creating a disgusting image is the way to stand out among their competition, but if this enterprise fails it won’t be because of government regulation, or taxes, it will be because they shot themselves in the public image foot.